The Network of People Living with HIV in Sierra Leone (NETHIPS) with support from partners on Monday 30th November 2020 observe candle night at their Head Quarter Office, Mulunesh Tennagashaw House, 261 Regent Road, Grafton and their Regional Offices in Bo, Kenema and Makeni. 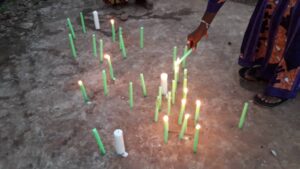 This day is set aside globally to remember all those who lost their lives to AIDS. It is a day set aside to show compassion to those living with HIV and also show that there is hope for all those living with HIV. As part of the program across the country, prayer session was conducted in both Muslim and Christian faith for those who have died as a result of HIV. The Vigil night also created room to project a good future in the HIV response.

In her address, and declaring the ceremony open, the National Coordinator for the Voice of Women, Musu A. Jimmy admonished all present that living with HIV requires one to be adherent to his or her treatment.  She said treatment buddies should stand in solidarity with PLHIVS which should help them to adhere to treatment and at the end attain viral suppression in order to have healthy communities.

The Coordinator said the event of this kind should be solemn in nature and mourners must use them to reflect on their journey of care whilst thinking of the souls that have passed away through HIV.  She concluded by thanking Solthis for providing funds for the event and urged her compatriots to tenaciously cling to their respective treatment regimens as a means to continue to live positively to HIV.

In giving the word of consolation and hope, the Chief Imam CRS Central Mosque, Sheik Abdul Kabia said that People Living with HIV must trust Allah for the provision of treatment and if they do their own responsibility, Allah will guide and protect them as they are all strangers in this world. He admonished them not to lose sight of the fact that HIV is not a killer disease as people perceived it to be. There is treatment and it is free and that they only need to adhere to it in order to live healthy and productive lives. He ended his statement by offering prayers for the departed souls especially those that played a critical role in establishing NETHIPS.

Another word of consolation was given by the Christian community which was represented by a Pastor from the Christian of Life Era Church in Grafton. He said PLHIV should always trust in God as Job did during his trying moments.  He noted that as a way of demonstrating their trust in God they should take their respective treatment backed up with prayers for the Almighty God to see them through their life journey. He encouraged them to see this moment as trying times and if they only take their treatment as prescribed, they will live to commemorate so many Candle Light vigils including World AIDS Day commemorations. He again concluded by offering special prayers for the heroes and heroines that have fallen through HIV/AIDS laying more emphasis on those that played a serious role in the establishment of the Network.

A symbolic lighting of candles was done. As a means to symbolically remember the Fallen Heroes, especially those that laid the foundation for the establishment of NETHIPS, candles were lighted by all those who graced the occasion and this event was led by the Executive Director NETHIPS. As the candles were burning, certain names of people who played diverse roles in forming NETHIPS were read to the congregation.