The Network of HIV Positives in Sierra Leone (NETHIPS) in collaboration with the National AIDS Secretariat, Ministry of Health and Sanitations, UNAIDS, AIDS Healthcare Foundation (AHF), SOLTHIS and other partners on Monday, 30th of December 2020 held a one-day dialogue forum at Radisson Blu (Mammy Yoko) Hotel, Aberdeen in Freetown on the theme: Global Solidarity, Shared Responsibility; AIDS – the other Pandemic”. 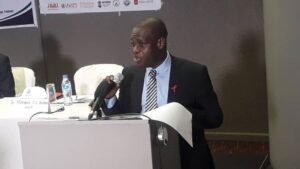 This event was part of the Pre-World AIDS Day commemoration that attracted stakeholders from diverse backgrounds/sectors including the health sector, Inter-Religious Council, UN Family, bi and multi-lateral community, Government of Sierra Leone, etc. The dialogue session was to draw attention of government and other partners not to be complacent in their response to HIV and maintain the hard-earned gains over the years so that these gains ate not sacrificed or reversed while tackling the COVID-19 outbreak. In his opening remarks, the Chief Medical Officer in the Ministry of Health and Sanitation, Rev. Cannon.  Thomas T. Samba underscored the importance of the dialogue forum. He cited the need   for a review of commitment to the fight against the global HIV/AIDS pandemic in Sierra Leone. He said the World AIDS Day commemoration should go along with a comprehensive review of commitments as a nation for an inclusive and sustainable HIV response that promotes universal health coverage and access, to scale up comprehensive prevention approaches and to invest in the HIV response initiatives.  Dr. Samba also made a presentation on the state of the HIV pandemic in the country, in which he revealed that HIV infection is more prevalent among married women than their non-married counterparts. He noted that HIV affects different populations through multiple and diverse transmission dynamics.

In his statement, the UNAIDS Country Director in Sierra Leone Dr. Isaac Ahemesah said   that people commemorate World AIDS Day to reflect on their love ones who have died as a result of AIDS, provide support to those living with and/or affected by HIV and to celebrate progress made together towards ending AIDS as a public health threat by 2030.

Stakeholders at the Dialogue forum at Radisson Blu

He added that COVID-19 has shown how health is interrelated with other critical issues such as gender inequality, social protection and economic growth and therefore called on people to work together. The Director General, National AIDS Secretariat, Abdul Rahman Sesay, recalled how NAS has been working with the Ministry of Health and Sanitation to integrate HIV into the general healthcare delivery system that serves the needs of the people. He said the outbreak of COVID -19 has affected the way health services are delivered and received especially by People Living with HIV (PLHIVs) in Sierra Leone.  It has contributed to PLHIVs missing their treatment appointments and also led to service obstructions likely to result to extra deaths from AIDS-related illnesses.

Presentations were made in the following areas:

The findings and recommendations were made followed by discussion by participants. The entire program  was covered live by the Sierra Leone Broadcasting Corporation (SLBC) Television and Radio.